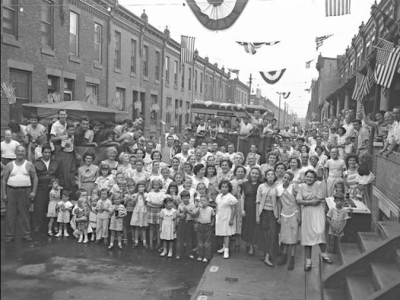 The latest installment in Sam Katz’s history series Philadelphia: The Great Experiment airs Jan. 24. This episode, “Promise for a Better City,” was previewed in the Inquirer by Katz:

In the summer of 1943, U.S. soldiers were fighting and dying to defeat fascism. Thanks largely to the massive output of munitions, ships, and tanks from Philadelphia, the tide began turning in the Allies’ favor that year. Nearly one of every six dollars invested in producing war equipment was spent in America’s arsenal: Philadelphia.

Though fear still clouded the lives of the city’s families, a sense of optimism and community spirit permeated Philadelphia neighborhoods. National demand summoned women and African Americans, formerly excluded from the workplace, into the busy factories that made the war machine hum.

Our city’s growing sense of neighborhood unity was documented by Evening Bulletin photographer Bruce Murray Jr. in the amazing photo above. This shot of nearly 140 neighbors – on a South Philly block that undoubtedly sent many men to war – conveys the remarkable skill of a man who captured the essence of hope with one click, long before the dawn of digital photography.

This and other great photos help tell the story of postwar Philadelphia in the third installment of the documentary series Philadelphia: The Great Experiment. The third segment, “Promise for a Better City,” will air at 7:30 p.m., Thursday, Jan. 24, on WPVI-TV (6abc).

Read the full article here, and don’t miss the segment’s premiere on Jan. 24.