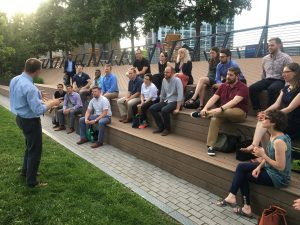 gorgeous outdoor beer garden. After a little over an hour of socializing, the group headed across Christopher Columbus Boulevard to Race Street Pier. As the sun set over the city, a large yoga class practiced at the end of the pier, and several cyclists took in the busy scene.

The happy hour group settled in on the wooden steps of Race Street Pier and looked toward a bustling Cherry Street Pier, while speakers Chris Puchalsky of Philadelphia’s Office of Transportation Infrastructure and Sustainability (OTIS) and Chris Dougherty of the Delaware River Watershed Corporation (DRWC) spoke about their work in transportation and the waterfront, and upcoming projects planned for the city. Chris Puchalsky discussed the city’s efforts to connect many of Philly’s neighborhoods through multiple types of transit in order to move away from the car-centric nature of the streets. He briefly addressed issues of scooter trends that are present around the country, and Philly’s stance based on safety and infrastructure concerns. Chris Dougherty discussed the Delaware River Waterfront Corporation’s plans for the many properties along the waterfront. DRWC has an aggressive strategy for renovating some large spaces along the Delaware, including Graffiti Pier, and a plan to open it to the public in the next year. 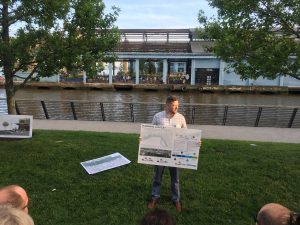 that connect citizens to their built environment in new and exciting ways.

Thank you to all of those who attended; APAPASE is excited to hold more events like this in the future!