Chestnut Hill Named One of APA’s Great Places in America

October 11, 2012 / Susan Elks / Comments Off on Chestnut Hill Named One of APA’s Great Places in America 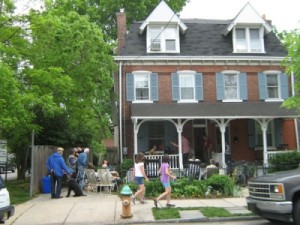 Once again, a local area has been named one of the “Great Places in America” by APA –  Chestnut Hill was named a Great Neighborhood.  APA’s flagship program celebrates places of exemplary character, quality, and planning. Places are selected annually and represent the gold standard in terms of having a true sense of place, cultural and historical interest, community involvement, and a vision for tomorrow.  APA Great Places offer better choices for where and how people work and live. They are enjoyable, safe, and desirable. They are places where people want to be — not only to visit, but to live and work every day. America’s truly great streets, neighborhoods and public spaces are defined by many criteria, including architectural features, accessibility, functionality, and community involvement.

In his 1975 report to the Chestnut Hill Historical Society, well-respected preservationist Arthur P. Ziegler, Jr., of Pittsburgh wrote, “Without question, Chestnut Hill remains one of the most beautiful residential areas in the United States.” It was not only important to save the neighborhood’s architecture, he said, “but the landscaping. Rarely does one see such a fine collection of great trees and shrubs.”The neighborhood’s landscaping, known as “The Wissahickon Style,” has been emulated throughout the country. Following the topography of the land to shape the neighborhood, this style of landscaping relies on the use of native plants, Wissahickon schist and fieldstone, and other materials of the Wissahickon Gorge, which formed the neighborhood’s southwestern boundary and encompasses today’s 1,400-acre Wissahickon Valley Park.